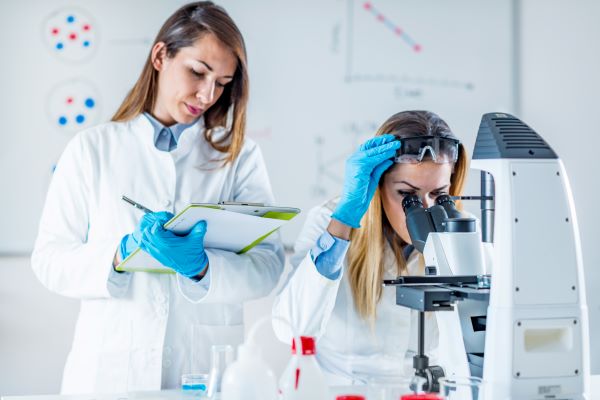 The federal strategy, launched last summer and aimed at rebuilding Canada’s vaccine manufacturing capability and preparing for future pandemics, is welcome and necessary, according to participants in the biotech-life sciences sector.

But there are also major challenges in implementing the strategy’s goals, they told Research Money.

Rob Henderson, president and CEO of BioTalent Canada, said within the next couple of years, there will be two open jobs in Canada’s bioeconomy for every one qualified candidate. By 2029, that gap is expected to increase to four to one, according to a national report by the non-profit labour market intelligence firm, which provides wage subsidy and other programs to bioeconomy stakeholders.

“Across all different bioscience sectors, there will be about 65,000 vacant jobs” by 2029, not including additional workers required to increase domestic manufacturing of vaccines, Henderson said in an interview. “That’s a huge challenge.”

Some 12,000 organizations in Canada’s bioeconomy collectively employed about 200,000 people in 2019, according to BioTalent Canada.

Eighty-three percent of those companies are SMEs with 50 or fewer employees. And just 30 percent of those firms even have a dedicated human resources department. As Canadian companies compete globally for talent, they may be ill prepared to do so.

“Many of those companies will fail,” Henderson said.

He anticipated the most severe shortages to be in biomanufacturing and processing, with BioTalent Canada’s forecast suggesting employers will be able to fill only one-quarter of job openings in these areas, between now and 2029.

“It would be awful to have all these wonderful chemicals, molecules and medical devices sitting on the shelf, all because we weren’t able to get the talent to move them through the economy,” Henderson concluded.

For her part, Pamela Fralick, president of Ottawa-based Innovative Medicines Canada, which represents Canada’s pharmaceutical industry, is optimistic about Canada’s Biomanufacturing and Life Sciences Strategy. In an e-mail to Research Money, she said this initiative “sends an encouraging signal to industry", indicating the federal government's recognition of the important and positive impact the life sciences sector has on the country’s economy, and the ability to respond to future health crises.

However, she added, implementing this strategy requires a “whole-of-government” approach, to ensure commitments are not undermined by decisions made elsewhere in the regulatory or policy environment. For example, proposed draft guidelines by the federal Patented Medicine Prices Review Board (PMPRB), which investigates complaints of excessive prices for medicines, create significant uncertainty for companies wanting to launch new medicines here.

The PMPRB estimates the new regulatory framework will reduce list prices for patented drugs in Canada by six percent on average, and generate up to $6.2 billion in payer savings over 10 years. But as they are currently written, Fralick argued, the guidelines  “will further decrease patient access to new medicines and drive away investments in Canada’s life sciences sector.”

Canada, she noted, ranks 19th out of 20 OECD countries, and last in the G7, for patient access to new medicines following approval. “This is unacceptable — Canadian patients and their loved ones deserve better.”

Merck Canada Inc., one of the top R&D investors in Canada, in a 2021 submission to the House of Commons Standing Committee on Finance, said the proposed price controls are untested and unprecedented in any jurisdiction.

“Canada will lose its status as an early market for new medicines and as a prime location for global clinical studies, which will have a detrimental effect on the health of all Canadians,” the company warned.

Innovative Medicines Canada and Merck Canada both have called on Ottawa to immediately suspend implementing the guidelines.

The federal government has invested more than $1.8 billion in 32 projects across Canada to rebuild Canada’s vaccine, therapeutics and biomanufacturing capacity.

This includes funding for 10 companies through the Strategic Innovation Fund as well as investments for vaccine candidates and therapeutics, through the Next Generation Manufacturing global innovation cluster, the National Research Council of Canada, the Regional Development Agencies, and the Canada Foundation for Innovation.

Ottawa committed an additional $2.2 billion over seven years from Budget 2021, to support the national Biomanufacturing and Life Sciences Strategy. This funding includes:

The federal strategy features five "pillars", including one called  “Laying a Strong Foundation by Strengthening Research Systems and the Talent Pipeline”, which recognizes the challenge of ensuring the sector has a sufficient future workforce. The strategy also includes a “complementary talent and skills approach”, to build up all components of the talent pipeline across the research-to-commercialization continuum.

According to the strategy, the government is “supporting the foundational inputs ” — from post-secondary institutions to research hospitals and Canadian scientists — that are necessary to have a healthy life sciences ecosystem. However, BioTalent’s report found that the life sector’s traditional reliance on post-secondary graduates will become a liability, as university degree completions related to this sector are forecast to decline between now and 2029.

Henderson said the Student Work Placement Program and other federal programs have become crucial means for SMEs to create some of the talent they need. But enrolment in such programs needs to be dramatically ramped up, and the programs should be made permanent, and enhanced with additional funding. Ottawa also needs new and innovative ways to attract Indigenous people and Canadians with disabilities to the sector, he added, along with improved access for immigrants and newcomers, all of whom are underrepresented in the bioeconomy. A federal initiative providing wage subsidies to employers, he suggested, would help reduce the perceived risk that might be associated with these new hires.

As for the industry, he maintained, "Companies need to get better at marketing themselves, including outside the STEM fields.” That would include increasing the number of student work-integrated learning programs and making them permanent,  as well as improving corporate policies and human resource offerings to enhance recruitment and retention.

Diversification, insisted Henderson, must start with CEOs, but the federal government could prompt change by tying its funding to the workforce makeup. “If you don’t start diversifying, you get cut off from the funding that’s traditionally been available," he said.

Another of the Biomanufacturing and Life Sciences Strategy’s five pillars, “Enabling Innovation by Ensuring World Class Regulation,” acknowledges the issue of inefficient regulations that Innovative Medicines Canada’s Fralick pointed to.

According to the strategy, Health Canada is taking the lessons learned from pandemic emergency measures, and applying them to its Regulatory Innovation Agenda for health products, with the goal of making the department’s regulations and market access more agile and responsive to innovation. These efforts feature a “regulatory roadmap”, addressing the irritants and bottlenecks affecting innovation and economic growth in the health and biosciences sector.

Andrew Casey, president and CEO at BIOTECanada, a national industry association, says the pandemic showed it is possible for government to approve vaccines and other technologies in a very effective way.

“If you talk to Health Canada, they’re the first ones to recognize that they also need to improve [regulations], and they’re taking steps to do that,” Casey said in an interview. “They’re aligning themselves with other jurisdictions, to make sure that our regulatory system is really borrowing from and learning from other jurisdictions.”

BIOTECanada is working closely with regulators, providing them with industry information to improve regulations and make them more efficient, he said. However, improving the regulatory system will require coordination between Ottawa and the provinces.

“We’re very siloed in Canada, with our health care system being provincially funded [and] federally overseen.”

In terms of the overall Biomanufacturing and Life Sciences Strategy, Casey says Ottawa is taking the right approach by supporting all aspects of the domestic life sciences ecosystem, rather than trying to predict exactly what vaccines and other technologies will be needed for future pandemics.

“We’re better off building as many companies as we can, as many vaccine technologies and components of the entire vaccine supply chain as we can,” he said.

For example, the strategy includes using facilities such as the National Research Council’s new $44-million Clinical Trial Materials Facility, and the NRC’s new $126-million Biomanufacturing Vaccine Facility — both in Montreal — to build strength in emerging technology areas. These include precision medicines, such as cell and gene therapies, RNA and viral vectors, and monoclonal antibodies.

Casey said Canada needs to be more competitive in attracting and rewarding investment capital for the biotech sector, through tax measures, R&D tax credits, and patent boxes, which tax income earned from intellectual property at a rate below the statutory corporate income tax rate.

However, Canada needs to find a way of growing large domestic anchor companies, like BlackBerry was for the IT sector, Casey said. “If we’ve failed at anything, that’s the one thing — is to get those anchor companies which are the ones that are going to be globally commercial and create some energy where they attract more investment and people.”

He pointed to QLT Inc. in Vancouver, which spurred a robust biotech cluster and ecosystem in the city, as the closest Canada has come to having such an anchor firm in the life sciences.  British Columbia’s biotech sector was non-existent in the early 1980s, when a group of University of British Columbia researchers founded what was then known as Quadra Logic Technologies. By 2019, Metro Vancouver was home to 1,300 organizations and 16,000 workers in Canada’s bioeconomy.

Casey observed how the Biomanufacturing and Life Sciences Strategy spans  policies and regulations across several federal departments. In that context, there needs to be a “quarterback,” or one senior-level coordinating body, within government — similar to Export Development Canada — to lead the strategy and ensure it is implemented successfully and supported long term, no matter who may be in power federally or what future political priorities become.

Canada also needs to collect data relating to company creation and growth, employment, and investment, he added, in order to measure the impact of the investments and the initiatives on the ecosystem.

“If we do it right, we can really grow something special and be very globally competitive,” Casey said. “It can be a real piece of the founding for building the economy going forward.”