While Canada mostly avoided the Great Resignation experienced in other jurisdictions, we are in the midst of a Great Retirement, which is leading to staff shortages across many industries. This is in spite of levels of employment engagement that are returning to pre-pandemic levels1. Will we need to entice these retirees back into the labour force and is entrepreneurship a way to do it? 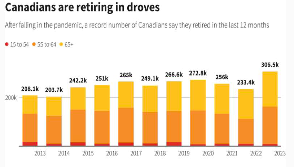 Statistics Canada defines retirement as, “…a person who is aged 55 and over, who is not in the labour force and receives 50 percent or more of his or her total income from retirement-like sources, such as the Canada Pension Plan and Old Age Security.”2

In addition, in 2021 almost a million people aged 55-64 were no longer working2. These older adults are healthier, richer, and more educated than previous generations. By the time they reach 65, on average, they can expect to live another 21 years.

What this growing cohort does in their “retirement”, therefore, will have a major effect on the Canadian economy.

Unfortunately, older adults do not show up in most policy reports on entrepreneurship and one wonders why? One explanation is that the data is not collected since it is assumed that after age 65, individuals are retired and no longer active in the labour force. That has been the assumption for the world’s largest study of entrepreneurship, conducted by the Global Entrepreneurship Monitor (GEM) annually in over 70 countries. However, GEM Canada is the exception, and data has been collected on Canadian entrepreneurs aged 18-79.

The table below shows the trends in entrepreneurial levels by age group in Canada from 2019-2021, based upon the Canadian GEM data3. 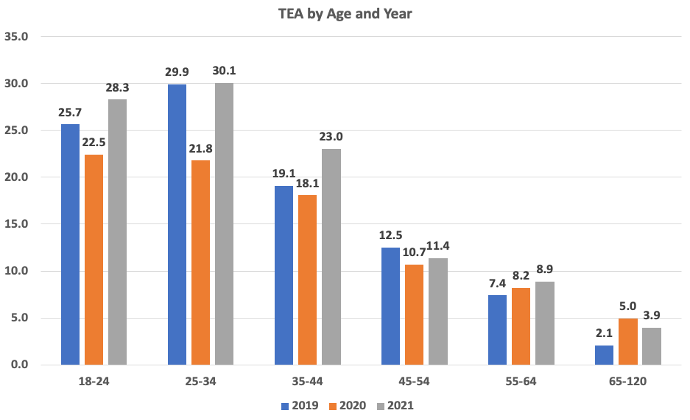 The vertical axis is the Total Early-stage Activity (TEA) rate, the percentage of the adult population planning a new venture, plus those operating one less than 42 months old.

Entrepreneurship rates among those older than 55 are lower than those aged 25-34, the peak age to start a company in Canada. However, compared with many other countries, these are very high levels. For example, in Poland the TEA rate in 2021 for the 18-64 age group was 2.0, in Italy 4.8 and Japan 6.3. By international standards, then, older Canadians are very entrepreneurial.

Another entrepreneurial activity older adults engage in is owning and managing an existing company. The graph below shows the trend in the rate of owner managers by age from 2019 to 2021. 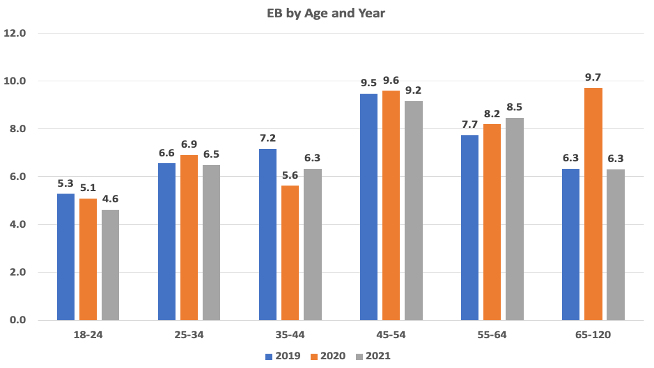 As you might expect, this shows a very different pattern to the startups, as older adults own businesses at a much higher rate than younger adults. Older adults have had more time to build up their businesses and make them sustainable in the long term.

There is a lot of evidence4 that working past the traditional retirement age of 65 is beneficial to mental and physical health. Being an entrepreneur is a significant part of this. Having a focus on encouraging older adults to become entrepreneurs should be an important part of a program to engage older adults in economic activity. This would have many benefits for both the individuals involved and the economy as a whole.

This article was co-authored with Chad Saunders, Associate Professor at the Haskayne School of Business at the University of Calgary. Peter Josty is Executive Director of The Centre for Innovation Studies (THECIS), a Calgary-based not-for-profit research company specializing in innovation and entrepreneurship. In addition to working in private research and business development, he holds a PhD in chemistry from the University of London and an MBA from the International Institute for Management Development in Geneva.Chad Saunders