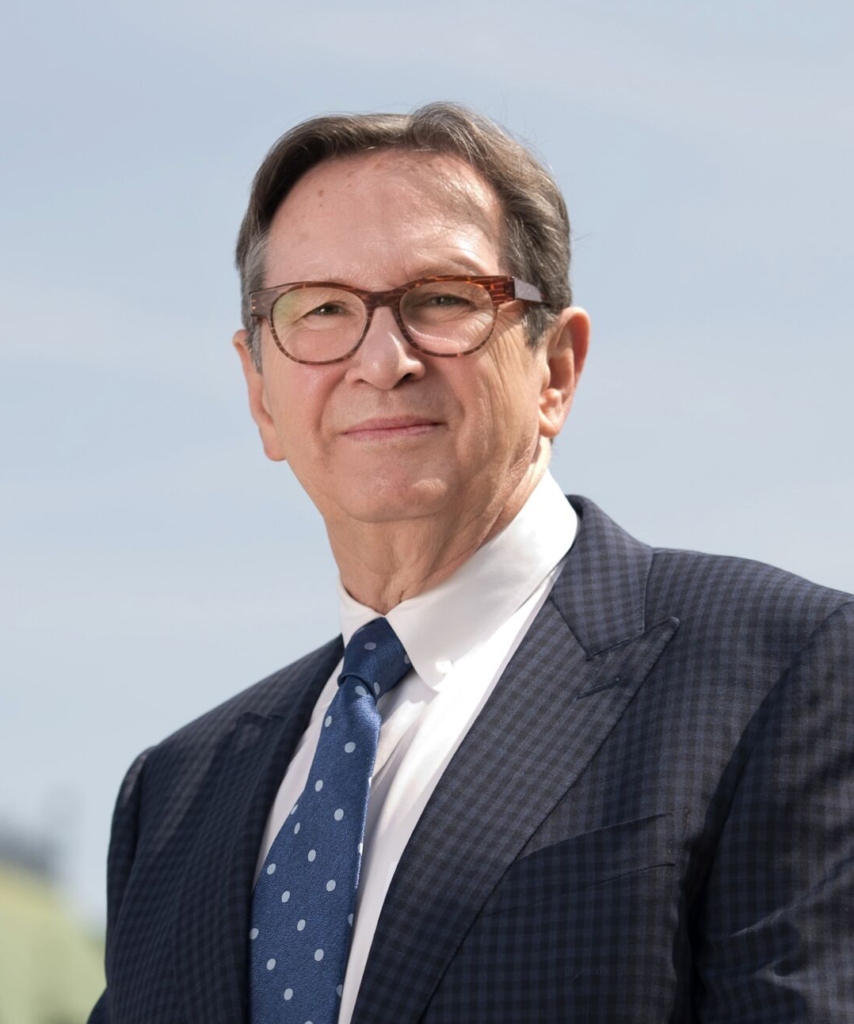 Throughout the COVID-19 pandemic, Canada’s health research community has clearly demonstrated the vital role it plays in helping get the country through a crisis. Indeed, the unprecedented speed with which COVID-19 research in Canada has progressed is a clear testament to the unwavering dedication and skill of our health research workforce.

However, the trying conditions our health and biomedical researchers have had to endure to get us to the point where thousands of Canadians are getting vaccinated every day are a national embarrassment.

This important workforce, upon which we rely to develop treatments for our deadliest diseases, faces daily uncertainty brought on by unpredictable fluctuations in their funding. This can lead to interruptions in their research or even having to start again from scratch. This is no way to treat our country’s best and brightest.

For decades, the federal government has underfunded the health and biosciences research sector, leading to stalled research and missed opportunities in critical areas. This sector’s rattletrap funding, which must rely far too heavily on the benevolence of private donors, persists despite numerous reports that echo HealthCareCAN’s own calls to action.

These reports, like the Canada’s Fundamental Science Review report and most recently the Industry Strategy Council’s report, both identify increased and predictable funding for research as necessary for economic prosperity. Canada cannot afford to remain complacent in this matter, not when it comes at the cost of Canada’s health research workforce and our economic resiliency.

Earlier this year, the Canadian Institutes of Health Research (CIHR) released an ambitious Action Plan with strategies for strengthening Canadian health research capacity. This is good news, but without increased federal funding for research to the tune of two per cent of public spending on health, CIHR’s grants and awards programs have little hope of realising the full potential of this sector.

While the 2018 federal budget contained important new investment in health research through CIHR specifically, that timeline will be ending next year and we are still lacking. 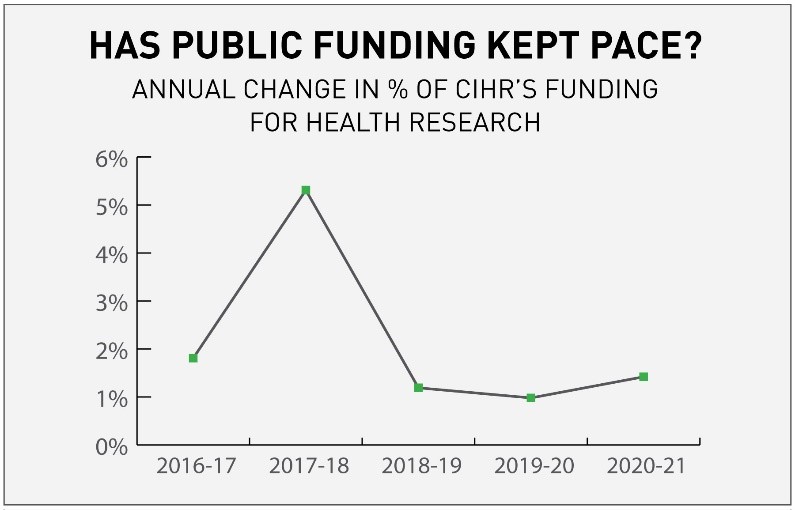 We can and must do better

Canada must make supporting health research a bigger priority than we have in the past.

If we compare how we measure up against competing countries like the United States, Australia and the United Kingdom, Canada’s portion of public spending on health devoted to research is severely lacking. Where each of these countries devote 3.8 per cent, 2.4 per cent and 0.9 per cent respectively, Canada stands in stark contrast, devoting just 0.43 per cent of its total health spending on health research. 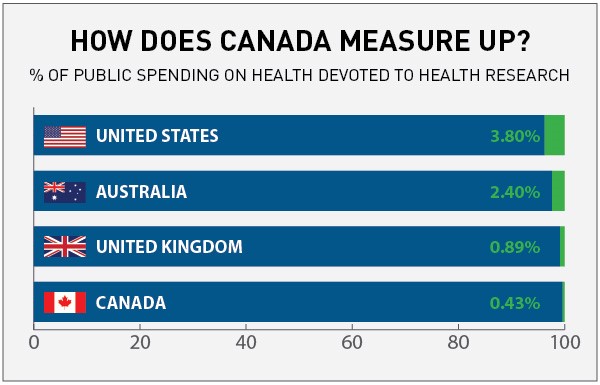 This contrast puts Canada at high risk of losing our health research workforce to competing countries like the U.S., the U.K. and Australia, all of whom have recently announced significant increases in federal funding for health research. For the U.S. specifically, under President Biden’s proposed $6 trillion investment in science, the National Institutes of Health, the American equivalent of CIHR, would receive $52 billion, a 21 per cent boost in funding that would increase NIH’s base funding by 6 per cent.

Gone are the days where we can lean on Canada’s health research sector’s past successes as indicators of our present standing on the world stage. If this sector is to command the international spotlight once again, which would help to both retain its hard-working and dedicated researchers and attract global talent and investments, the federal government must make good on its promise to “build back better” by first building a solid foundation of federal support.

As François-Philippe Champagne said earlier this year in his role as Minister of Innovation, Science and Industry, “Great science and research is the first step in driving innovation. Now more than ever, Canadians are looking to their researchers to develop innovative solutions to real-world problems.”

As we go forward, Canada’s researchers are eager to do their part. It’s now up to our newly elected federal government to take action. Time is of the essence.

Paul-Émile Cloutier, M.Pol.Sc., M.H.A, is President and CEO of HealthCareCAN, the national voice of healthcare organizations and hospitals across Canada.