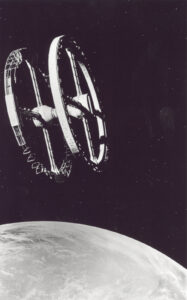 The immortal Oscar Wilde told us that cynics are big on price, but not so much on value. By that reckoning, a great many of us rank as anything but cynics when it comes to research and innovation. We value shiny objects to play with at the end of the day, but we reflect far less on the sometimes steep costs they invoke.

Consider the longstanding passion for space travel, a trope of science fiction that dates back more than a century. Among the consummate expressions of this vision was Stanley Kubrick’s 1968 opus 2001: A Space Odyssey, which depicted a highly evolved version of an airplane whisking passengers to a space station orbiting the Earth.

Well, one passenger, anyway — apparently sitting alone in what looks to be the business class section, outnumbered by the all-female crew of flight attendants waiting on him. It was a happy notion 50 years ago, but to a cynical, 21st-century bean-counter, it raises a hard question: who paid for all those empty seats?

The logistics of fleet management dictate margins of cost-effectiveness, which is why commercial flights are packed. Aircraft are expensive to build, expensive to run, and expensive to maintain; spacecraft are even more so. The one in 2001 was festooned with the logo of what had been a major operator, Pan Am, which ought to have done this math. As today, any route that was only bringing in one passenger per flight should have been struck from the roster in short order. However, such a sensible decision would burst the bubble of so many of us of a certain age, who wondered if we might live long enough for a holiday on the moon.

That wistful promise, combined with pockets deep enough to countermand bean-counters, has led to real-life incarnations of Kubrick’s space-plane, which have carried paying passengers to the edge of our planet’s atmosphere, where they can experience microgravity and a pretty good view, though perhaps not much more. It is no accident that the interior of these craft look a lot more like 2001 than a typical shuttle run from Toronto to Orlando, which is a major clue that the owner-operators have indulged themselves beyond any conventional logistics.

Nevertheless, this is not 1968, and few of us are fooled by a wildly overpriced fun-house ride. Consider the contrast with NASA’s slow and steady mission to the moon, taking place right now, populated only by a crash test dummy, while the ship’s owner-operator works out the logistics of a trip that opens up possibilities beyond mere amusement.

From a historical perspective, it is entirely appropriate that this conservative approach co-exists with the antics of billionaires, as so many breakthroughs have witnessed the same uncomfortable pairing of caution and daring — probably going all the way back to when we as a species were trying to figure out which foods would kill us and which would make us healthy and strong. This same spirit has driven the rise of technology spun off from the original space-race of the 1960s and, unlike vacations in space, one specific technology has seeped into the life of everyone from high-rise city dwellers to nomadic shepherds: the integrated circuit.

The development of this technology accelerated dramatically during the original space race, which began in the late 1950s with televisions full of vacuum tubes and wound up in the 1970s with the market full of “solid state” TVs that paved the way for the large, thin screens now found everywhere. Along the way, chips seeped into just about everything else in our homes. Unlike the rest of us, however, they are now making their way into space in increasing numbers, powering a space-based economy that is still booming. Two countries were vying for supremacy in space when Kubrick imagined our space-faring future, but according to the Space Foundation, some 90 nations now operate in this sector, worth some half a trillion dollars annually. That total includes Canada’s new spaceport in Nova Scotia and companies like Montreal-based GHGSat, part of an array of digitally driven enterprises that are nowhere near as sexy as astronauts piloting spacecraft, but make far more business sense.

The current status of silicon chip technology served as the poster-child for a contentious discussion at last week’s Canadian Science Policy Conference in Ottawa. A session, dedicated to the fragility and resilience of supply chains, returned repeatedly to the sheer ubiquity of this technology and the impossibly high stakes that now surround the way it is manufactured. A new book puts an even finer point on the challenges of producing hardware that has become so tightly woven into our civilization that its possible disruption now rivals the dread once reserved for nuclear war.

A famous NASA axiom insists that “space is hard”, but chips may well be harder. They are the unseen components of a digital reality that operates far too efficiently for its own good, or ours. They provide us with capabilities that are almost beyond reckoning — from the toys that entertain to the intricate networks that now stoke economic development in most of the world. We can imagine a world without hotels in orbit; we do not want to imagine a world without computer chips turning keystrokes and data into screens full of information with practical value.

That value is intoxicating: instantaneous, world-wide communication; we monitor the world’s weather on a moment-by-moment basis, often saving lives and property along the way; we master medical challenges in record time. Data-driven devices can be found everywhere from schools and farms to remote mountaintops and ocean floors. The familiar household appliances in our homes are being transformed into network nodes that make these tools ever easier to use, even for those who might otherwise have been physically unable to do so.

At the same time, the price is sobering. Computer chips depend on elaborate global alliances, whose vulnerability was exposed during the complications imposed by a decidedly non-digital player — a pesky virus. Their operation consumes staggering amounts of power, even as we struggle to determine the energy sources that would best provide that power without destroying a natural world for which we still hold some affection. They make it possible to lie and misdirect entire populations, as well as compromising our privacy and economic freedom, all at scales that were once unthinkable.

When astronauts travelling to the moon showed off their tourist photos, the one that stole the show was the famous “blue marble” shot of earth. In one fell swoop, we realized that this image revealed what was really important — the only home humanity had known, and perhaps would ever know. It is no coincidence that enthusiasm for the space program rapidly waned afterwards, to be replaced by an ongoing enthusiasm for nurturing the well being of that home with an unprecedented sweep of environmental protection measures that continue to be refined and expanded.

As we contemplate the challenges that face computer chip manufacturers, most of us have yet to reach this “blue marble” moment. Yet it is imperative that we do so. Humble though they may be size, this technology looms large over our future in ways that must be discussed. They are not as as cheap as we might think, but the product of an unparalleled array of research networks, trading channels, and shared expertise that we are only starting to glimpse. We scarcely know their real price, and their ultimate value to us is still being determined. Consider both, the next time your screen acts up.