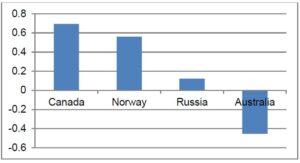 This graphic shows a measure for each country called the Economic Complexity Index. This index is a ranking of countries based on the diversity and complexity of their export basket.

So, Canada is far from being a hewer of wood and drawer of water. We have a much more complex export mix than Australia, Norway and Russia.

Broadly speaking, richer countries usually have more complex exports. The highest-ranked countries according to this index are Japan, Switzerland, Germany, South Korea and Singapore. The U.S. ranks No. 11 out of 133 countries. The lowest-ranked countries are Venezuela, Cameroon, Papua New Guinea, Liberia, Guinea and Nigeria.

That is a huge difference, and is explained by the fact that a much larger proportion of Australia’s exports are “simple” compared to Canada. Well over half of Australia’s exports are commodities such as iron ore, coal, petroleum and gold. The corresponding number for Canada is roughly half that, with exports of petroleum, gas, gold, lumber and wheat. Canada has significant exports of complex products such as cars, car parts, ICT, machinery, medications and plastics.

The researchers place the diversity of tacit knowledge – or knowhow – that a society has at the heart of its economic growth story. Research from the Harvard Growth Lab finds that countries whose exports are more complex than expected for their income level grow faster. So, according to this approach Canada would be expected to grow faster than Australia.

This is true, with Canada’s growth to 2029 estimated to be 3.06 per cent per year, compared with 2.17 per cent for Australia. (These estimates were made before COVID-19, so take them with a grain of salt.)

The Harvard Growth Lab has an interesting view on economic development. They see that countries grow by diversifying into new products of increasing complexity. So, the more complex your export mix the more opportunities you have to grow into adjacent areas. Some examples from Canada could be:

The conclusion? Canada has a much more complex economy than we realize. The idea of using the diversity of tacit knowledge to diversify into adjacent areas is an interesting one that should receive more attention. It’s probably a much more robust approach than trying to attract unrelated businesses to set up here.