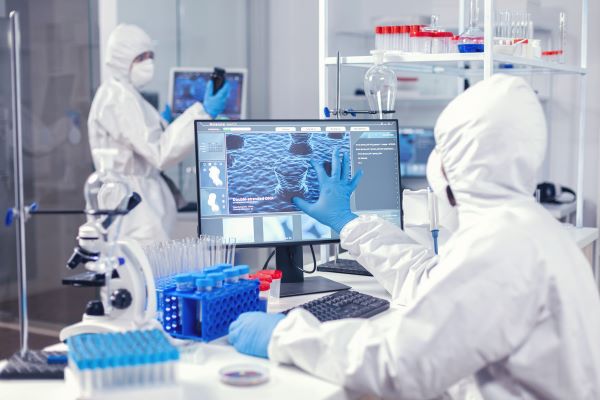 Despite record-setting investment in Canada’s life sciences sector, there is a severe shortage across the country of specialized laboratory space needed by startups and scaling companies.

Several companies have been forced to either sell or leave Canada and relocate to the United States and elsewhere where there are life sciences hubs with much more “wet lab” space for doing R&D, commercial real estate experts told Research Money.

The current demand for wet lab space (where chemicals, drugs and biological materials can be tested and analyzed) in the Greater Toronto Area is more than 2.5 million square feet, but “the availability is all but zero,” says Jim Wilson, senior vice-president at Lennard Commercial Realty and who leads a team that works with scaling biotech and life sciences companies.

“Researchers cannot do their research without access to a wet lab,” he said in an interview. “I’ve been doing commercial real estate for over 30 years and I’ve never seen a situation like we’re seeing today.”

Some small life sciences companies, in what the real estate business calls “shadow vacancy,” are working in the basements and hallways of universities, hospitals and research institutes, “where they have begged or borrowed space on a wet lab bench,” Wilson said.

Lab vacancy in the Greater Toronto and Hamilton regions is “virtually non-existent,” according to a CBRE report authored by Lacey.

More than 3.5 million square feet is required by lab tenants in the region, with demand being 141 times greater than the currently available lab space in the market, says the report.

Stakeholders are cautioning that the lack of wet lab space is beginning to create significant challenges for companies that want to remain in the Greater Toronto Area, and is constraining the growth of the domestic life sciences sector, according to a separate report by Toronto Global.

Problem’s origin can be traced back three decades

Wilson traces the problem’s roots to the early 1990s, when Ontario’s research universities began allowing faculty and staff to retain ownership of the intellectual property developed at these post-secondary institutions.

That enabled professors and staff to spin off companies to commercialize their innovations, which started happening around the same time that big pharmaceutical firms began backing away from doing R&D due to the high cost and uncertainty of bringing a new drug to market, Wilson said.

“That opened up a new sector in life sciences. It created a vacuum for these startups to fill,” he said . “It has taken the last 25 years to build this wave [of companies and investors] to where it is today.”

Wilson and Lacey said the problem of scarce lab space in the Greater Toronto Area (GTA) was made worse, ironically, by the MaRS incubator, built in downtown Toronto in 2005. With 1.5 million square feet, MaRS (which stands for Medical and Related Sciences) was pre-engineered to house 60 per cent wet lab space and 40 per cent office space, to accommodate what was then expected to be a thriving life sciences ecosystem.

“Then the 2008-09 recession hit and all the biotech companies saw their funding slashed and the [MaRS] project failed at the time,” Lacey said. “That really set the growth of the life sciences ecosystem back.”

MaRS was a “great idea, great concept, great location,” Wilson said. “But it became an obstacle to the private sector getting into life sciences in the GTA and elsewhere in Canada, because they couldn’t fill it [the MaRS facility].”

Life sciences companies stuck in the middle of capital developers

That situation has changed dramatically over the last 15 years. MaRS’s life sciences-wet lab space is full and the organization regularly has to turn away companies because there is no space to accommodate them.

The boom in life sciences has been driven by more than $5 billion in public equity and venture capital for biotech and life sciences in 2019, along with a federal commitment of $4 billion bolstering Canada’s Biomanufacturing and Life Sciences Strategy.

“The scope and the depth of the life sciences sector and the demand has caught a lot of people off guard because it happened so quickly,” Wilson said.

There are at least 200 life sciences startups in the Greater Toronto Area, and Lacey estimates that about 130 of them are without sufficient biomanufacturing and R&D lab space. The region is missing out on the job-creation opportunity if all that demand was satisfied, he said.

For example, with 3 million square feet of demand for wet lab space, and the average lab occupancy is one person for every 400 square feet, filling just two-thirds of that demand creates at least 7,000 jobs immediately for the Greater Toronto Area, he said.

Yet more wet lab space has not been built or leased during the last two decades, because commercial real estate developers in the GTA and elsewhere in Canada, along with the big banks, are risk averse, Lacey said.

“They don’t like pre-revenue R&D companies that are at the startup or early stage,” he said. Instead, developers and banks are looking for big financeable covenants from corporate tenants the size of huge multinational companies like Pfizer or AstraZeneca.

At the same time, the venture capital firms backing early-stage Canadian companies do not want their money spent on paying rent, Lacey said. “They’re looking for a quick return on their investment from the company’s technology, not from investing in real estate.”

“So these life sciences companies are stuck in the middle of two capital partners, the VCs on one side giving them money, and the real estate developers they need the space from — and neither of them wants to fix the problem,” Lacey said.

The federal Biomanufacturing and Life Sciences Strategy’s five foundation pillars includes a pillar called “Building Public Capacity.” However, it is aimed at supporting new and enhanced manufacturing space for vaccines and the infrastructure needs of research institutions — not wet lab space for early-stage life sciences companies.

For example, the strategy provides $500 million over four years for the Canada Foundation for Innovation to support the bioscience capital and infrastructure needs of post-secondary institutions and research hospitals.

Wilson pointed out that world-class life sciences hubs, such as those in Boston-Cambridge and the San Francisco Bay Area, were built with government support. The Greater Boston Area alone has 45 million sq-ft of lab space, with another 17 million sq-ft under construction or proposed — and renting lab space there is cheaper than Toronto.

Companies that can afford to, such as AbCellera Biologics Inc. in Vancouver, are investing in building their own wet lab space and associated R&D infrastructure.

In Ontario, there are positive signs that developers are starting to address the shortage of wet lab space.

In Hamilton, McMaster Innovation Park, which is designed for biotech and life sciences companies, has started construction of the first phase of two R&D lab buildings for anchor tenant OmniaBio. The first-phase will have 26,000 sq-ft available for leasing, and is scheduled for completion in the third quarter of 2023.

With long-term plans to add a total of 1.3 million sq-ft of labs and biomanufacturing space, McMaster Innovation Park is finalizing negotiations with a new capital partner that plans to inject more than $1 billion into the technology park, Wilson said.

First Gulf, a development firm in Toronto, and San Francisco-based Spear Street Capital, have partnered on The Core, a 24-acre campus with five new buildings dedicated to life sciences research. To be built at the Sheridan Research Park in Mississauga, The Core will have 400,000 sq-ft of lab and advanced R&D space, with the initial phase of 160,000 sq ft expected to be delivered before 2024.

In another project, KingSett Capital plans to add four storeys with 187,000 sq-ft of dedicated research labs to its 20-storey Toronto office building, across the street from the MaRS Discovery District. The rebuild is scheduled to start in early 2023, with completion due in 2026.

According to Lacey, while it is feasible to renovate existing office buildings to accommodate life sciences companies, doing so can cost $300 to $800 per square foot in the Toronto region — more expensive than any other real estate asset.

Lacey has been advocating for Ottawa to provide an interest-free, long-term loan program to early-stage companies, to cover the cost of constructing wet lab space and related interior infrastructure in renovated office buildings.

Another way the federal government could help is by supporting projects to build more incubator-accelerator facilities with wet lab space, so startups could at least move out of universities and research hospitals, he said. “That would give them a place that they lease for six months or a year, without having to fill up all the space or buying all the equipment.”

Government needs to understand that “R&D is the horse that pulls the biomanufacturing wagon,” Lacey concluded. “If government supports the growth of R&D in biotech and life sciences companies within our ecosystem, they will grow here and they will produce more manufacturing and success stories and jobs.”